This week’s post is by a guest writer, Mike Pratt. Mike and Michelle Pratt moved with their family to Ukraine in 1995.  They have five children and five grandchildren. They have lived and served in three different cities; Kyiv, Dnipropetrovs’k, and now L’viv. They have started two churches in Ukraine;  the first in Dnipropetrovs’k, which was successfully transitioned into all Ukrainian leadership. Today they are serving in L’viv.

My Visit to Ukraine’s War

21 hours by train, a 3-hour car ride, and I arrived in Stanytsia Luhansk, the front line in Ukraine’s war with Russia.  I spent 3 days there to help our friend, Sasha, who serves as a chaplain for the Ukrainian army and the people of this battle-weary town.  Stanitsya was settled in 1688 and grew to a population of 15,000 residents.  Today, there are only 3,000 people living here.  The others fled when the town was threatened and then over-run 3 years ago when the war began.

The Ukrainian army pushed the Russian-backed separatist army back across the river and established a stronghold around the town, but not without significant damage to many homes and businesses.

The river serves as a new border; the enemy soldiers are dug in on the other side.  Exchanges of small arms, heavy machine gun, and artillery fire are regular occurrences and part of life for those few people who remain.  They have nowhere to go, and many of their sons joined the separatist army, so they stay to be close to family who serve with the army on the other side of the river. 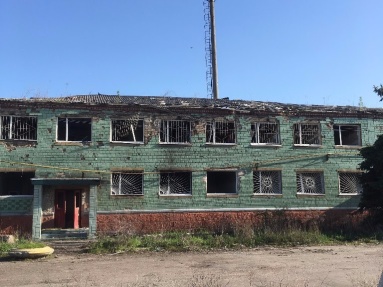 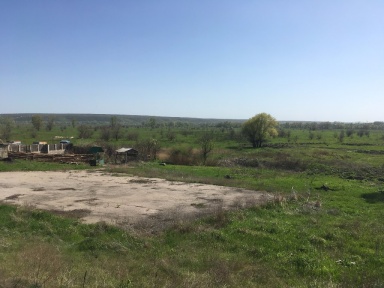 The day I arrived, Sasha took me to one of our outposts to meet “her” soldiers, and to pass out tea, coffee, and socks donated by our church and friends from L’viv.  We spent an hour with these guys; laughing, drinking tea together, and talking about home.  We ended with a prayer for them and returned to Sasha’s house.

She was hosting two other teams.  One group of six was made up of people from Holland, England, Romania, and Ukraine, and had come to do repairs in one of the homes.  The other team, a father and son, traveled from Germany to serve the children who still live in Stanitsya.

As night fell, we talked about our day, and then, the shooting started.  First it was small arms, then heavy machine guns, and then artillery.  It continued for over an hour.  There is no immediate threat of either side taking back ground from the other, but the exchange is a deadly reminder to each that, “we are still here.”  Sadly, one Ukrainian soldier lost his life. 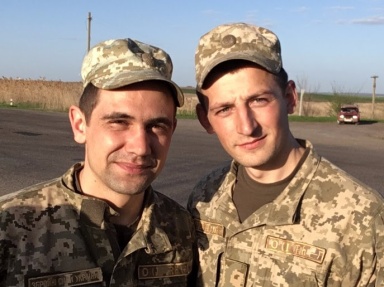 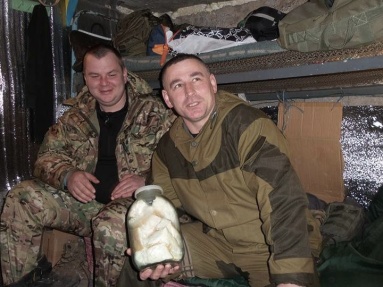 The new day began with bright, blue sky and no evidence of the exchange a few hours earlier.  The daytime is typically safe, and life returns for those remaining.  The market opens, people go to work, children play outside and go to school.

Sasha operates a tent located next to the border crossing.  During the daytime, people regularly travel between the two sides to visit family and friends.  They also bring food and other products, purchased in Ukraine at lower prices and sold in the LNR (Luhansk National Republic).  The tent serves as a meeting place for people to rest and as a church. 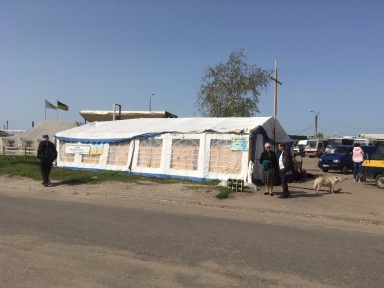 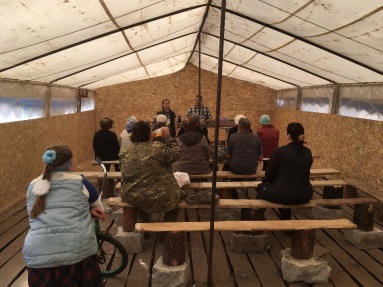 I was asked to teach a bible study and speak to those who attended.  I began by asking people what occupies their minds the most; what do they think about when they go to sleep and wake up?

Nina said, “I’m all alone.  My husband was killed by stray gunfire 3 years ago.”  One elderly woman began to cry uncontrollably, “My husband is in the hospital and I can no longer get the medical supplies he needs!”  Several commented that when they lay down to sleep they wonder, “Will the shooting start tonight?  Where will it land?”  I taught from Colossians, about the very real battle we face to see Christ when life is so difficult, and how to have hope.  They seemed greatly encouraged.

I taught once more later that day and then Sasha gave me a tour of the city.  The night passed peacefully.

Sunday morning, I taught again and returned to Sasha’s to prepare to leave and return home.  Something quite unexpected happened.  Olya is ten years old. She has seen so much death and destruction.  We met at church that morning; she was quite talkative.  Sasha invites the kids to her house after church to play games, do crafts and have a Bible lesson.  As I was packing to leave, Olya came in and said, “Mike, I have a gift for you!”  With a big smile, she handed me a bookmark she had made, then returned to play with the other kids.  She wrote something on the back.  Unable to read her handwriting, I asked Sasha what it said.  She wrote, “So that your life would be good!”

The destruction, shooting, heart wrenching stories all had an impact, but this little girl, having seen so much, with joy on her face, wishing me a good life was too much and I was overcome.