Snow clung to tree branches and metal roofs in the rural Ukrainian village where my parents live. I had just arrived from the States for a holiday visit.

Dad drove past yards with chicken coops and a few plucky turkeys bracing against the cold. Ferocious guard dogs leaped at their gates or watched suspiciously as we passed. An evergreen forest loomed behind us. I could hear the bellows of cows and goats from deeper in the village.

Out the side window of my parents’ minivan, I noticed a small crowd of – well, people, I assumed – walking purposefully toward the vehicle. Their clothing was from another time period. Long skirts with traditional Ukrainian embroidery, baggy pants reminiscent of the cossack days, and old fashioned hats and scarves.

Every face was completely concealed by a mask. Some were clownish and warranted laughter, but others were grotesque enough to scare me.

Why were these masked strangers walking toward us?

Before I could ask what was happening, the group had rallied in front of us. One man stretched himself out, chest down, on the hood of the van and glared through his devilish mask into our faces.

I couldn’t decide if I should be terrified, amused or dumbfounded. What was going on and WHAT would happen next?

My family was not mugged or attacked that day. To my astonishment, my dad calmly inched their van forward and the crowd dispersed. He and my mom began explaining a tradition called Malanka, which is celebrated on Old New Year. This is the most unique custom I’ve encountered, after visiting and living in Ukraine for more than 20 years.

Let me tell you about Malanka. 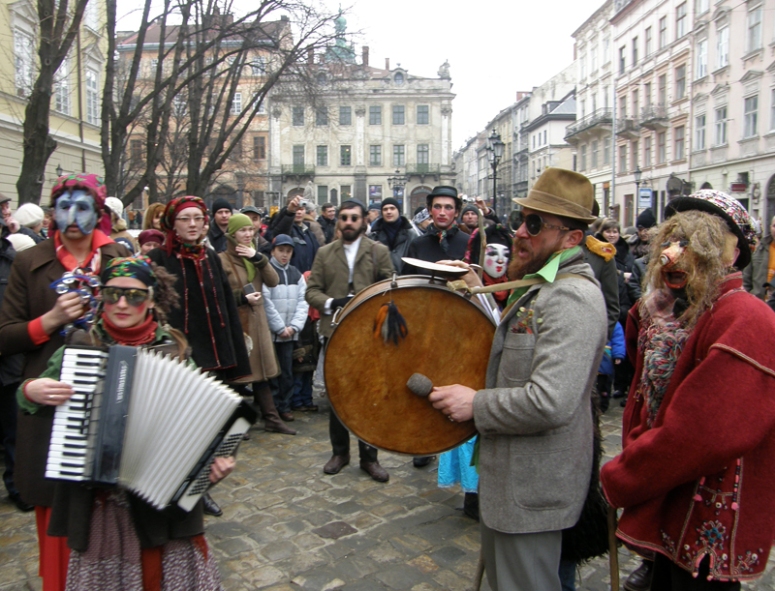 Image by Водник via Википедия

Until 1918, Ukraine followed the Julian calendar and recognized New Year’s Day on January 14. Malanka has long been part of the celebrations on what is now Old New Year’s Day.

I came across plenty of debate about who exactly Malanka was. Many say they are remembering St. Melania, a Roman martyr. Others claim that Malanka was Mother Earth’s daughter, who was captured by the Devil, or that the tradition is linked to the cult of the dead.

Whoever she was, most people agree that the celebration itself signifies the new year, the death of winter, and the anticipation of spring. Celebrated primarily in Western Ukraine, it is deeply rooted in national pride. During Soviet times, people were banned from participating in local traditions like Malanka, but Ukrainians demonstrated their patriotism by celebrating anyways. Historically, it was a rural festival that men could take part in, because there was little farming work in the winter.

As I learned firsthand in my parents’ village, residents who participate in Malanka dress in outlandish costumes, which are made well in advance or even handed down from generation to generation. In some parts of Ukraine, costumes are so immense that participants are actually sewn straight into them and can barely move once inside!

Image by Marisha26 via Wikimedia Commons

Once in costume, the group treks from house to house in their village, singing, dancing, and performing short skits. This can go on for even 24 hours.

The characters in the performance vary from one town to the next. Some people dress as animals, like bears, goats, and horses. Others pose as kings, queens, gypsies, and sometimes satirical modern figures, like politicians or dictators.

But the heroine of this tradition is Malanka. She is usually played by a young man in full costume and makeup or a mask. Some say Malanka is a clumsy wife, who spills and trips and makes comical mistakes in her housekeeping. The “lesson to be learned” is that young men in the village should choose wisely whom they marry! Other beliefs hold that Malanka is a woman of great beauty and talent.

Some groups end their performance by acting out the death and resurrection of a goat, which represents nature’s death in winter and revival in the coming spring. Others finish with an impressive bear fight, also played out by the costumed villagers.

Malanka is a festival of practical jokes. The characters in the performance may come into the homes they visit, move items around or make a little mischief, although never harming people or property. In my parent’s village, they’ve been known to take off the gate to someone’s house and hide it!

Shchedry Vechir, or Generous Evening, is celebrated on January 13th. This night is in honor of St. Basil the Great. Ukrainians gather for a homemade feast, especially pork, as St. Basil is considered the patron saint of pigs.

According to one tradition, the oldest woman brings grain and the oldest man brings well or river water to Shchedry Vechir. The woman prepares a ritual porridge from these ingredients and places it in the oven. If the pot cracks in the oven, it is a sign of bad luck on the household, but an un-cracked pot signifies the promise of a rich harvest in the new year.

Another Old New Year tradition is Christmas caroling. Ukrainians actually carol at Christmas-time and on Old New Years. Children go from house to house, singing songs and reciting poems about the nativity. I have to tell you – Ukrainian children are IMPRESSIVE in their ability to memorize!

When the children first come into a home, they throw a handful of grain onto the floor, signifying good luck. The homeowner should not clean up the grain until the next day, so as not to sweep away their luck.

In exchange for songs and poems, the children receive candies or small amounts of hrivna (Ukrainian currency).

Malko, Romko. “Malanka — a feast that has come down to us from the distant past.” Welcome to Ukraine. Accessed January 04, 2018.