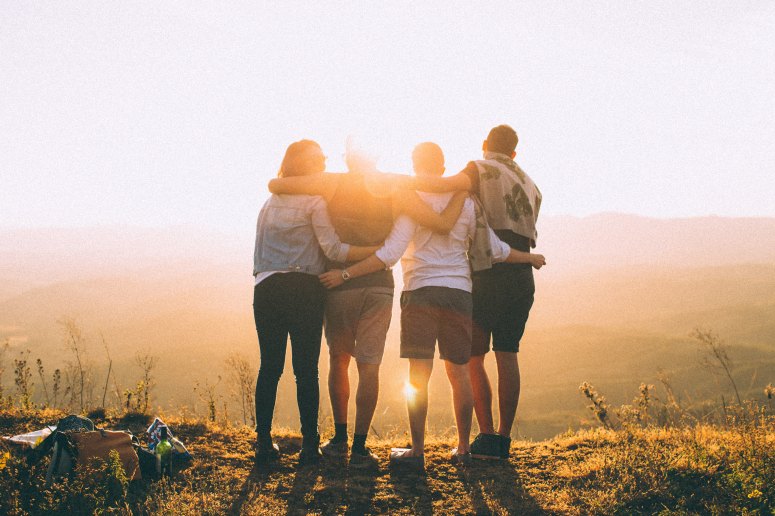 It’s been a long time since I felt the need to be part of the “in” group. As a natural people-pleaser, I appreciate how the craving for approval lessens with my age.

So it surprises me now when I felt hurt by being “left out.”

As a foreigner living in Ukraine, I don’t always fit in completely in my host country. Sometimes, even unintentionally, people make a distinction between me and them. Those distinctions have intrigued me at times, because I don’t remember feeling them as strongly when I was a missionary kid, over twenty years ago in other parts of Ukraine.

I imagine several factors play into these distinctions.

First, and most obviously, I am an American. I was born in the States, raised by two American, English-speaking parents. My siblings and I grew up in Ukraine, but our home still reflected a strong American culture.

Second, I lived in eastern Ukraine during my childhood/young adulthood. My Ukrainian friends there grew up with me. We spoke in Russian and engaged in the same social activities as any other Ukrainians around us. In contrast, I came to L’viv as an adult, and people here don’t always know or consider that this country has been home to me for so many years.

Finally, cultures vary widely from eastern to western Ukraine. I often find that if I don’t understand a practice or tradition, it’s because I’m considering eastern Ukrainian customs, not because I’m thinking from an American perspective.

Disclaimer here: I’m not airing a grudge or complaining in this post. The topic has simply led me to some reflections about third culture kids (TCKs) and expats. If you’re one of those, maybe you will relate and find comfort knowing you’re not alone. Or, if you’re someone who interacts regularly with a TCK or expat, maybe this will help you understand them better and benefit your relationship.

Not Part of a “We” Group

I’ve asked myself why it matters when I feel a separation between “me” and “them.”

I’m thankful to be an American. I don’t feel the need to prove how “Ukrainian” I am, although I’m also very grateful for the impact this country has made on my life. I recognize the different cultures that play a role in my mentality, lifestyle, and beliefs.

So, why does it matter?

Because a third culture kid, and to some extent an expat, is not part of a “we” group in any one country.

When I’m in Ukraine, I’m always going to be different, because I was born in America to an American family. I’ll never fully think or believe according to the culture I live in. But in America, I’m different, too. I haven’t had the same social or cultural experiences most Americans my age have gone through.

A TCK or expat never quite “fits” in any location. For many of us, we simply accept that as part of our life. We see in it both blessings and curses.

But for those of you who interact with third culture kids or expats, if you acknowledge this part of their reality, it may bolster them to open up more and deepen your relationship.

This applies to people in both “home” and “host” countries.

When I’m in the States, my “home” country, I often worry that what I do or say might be perceived as strange or even hurtful. There have been times when people in America misunderstood my heart and were offended by something I said or did. I had no idea I would offend, because I was approaching the situation from my “Ukrainian side.”

When the other person stops in those moments and considers “maybe this is just a cultural difference,” it opens up the conversation so we can learn from one another, and the relationship is deepened.

On the flip side, in my “host” country, Ukraine, I’m always grateful when my Ukrainian friends recognize the importance their beautiful culture holds in my identity. While it will never fully be my country, their homeland has become dear to me, part of who I am. I may think differently at times, but it’s usually because I’ve considered various cultures and tried to pull from the greatest strengths of each one. Regardless, I love to sense a connection with people here who have become my brothers and sisters.

I wrestled with this post. In some ways, it feels very selfish to me, as if I’m asking everyone to see the world through my eyes.

But in the end, I decided to share, because we live more and more in a global world. Regardless of country, work or ministry, many of us have friends from other places, other cultures. Some of us have welcomed “home” expats or TCKs after years of living abroad. I hope this post will give you some tools to strengthen your friendships.

And as always, I’d love to hear your thoughts on the subject, as well!